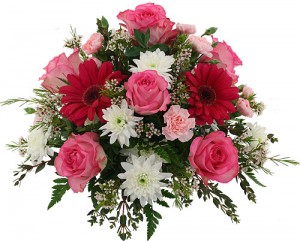 After a few years of being in a relationship, it’s difficult to come up with new ideas that put that look of surprise on your significant other’s face anniversary after anniversary. We recognize this difficulty, which is why we’re offering up these tips to make sure your next anniversary is even more memorable than your first.

What image comes to mind when you picture a boyfriend picking up his girlfriend for their two-year anniversary date. Let us paint one for you. It’s a crisp Autumn night. The boy pulls up in his freshly washed, jet-black corvette. His hair is slick; his tie knotted just right. He checks himself out in the rear-view mirror, pops in a breath mint, and begins to walk toward the front door. Meanwhile, the girlfriend has just finished straightening her hair. She applies her fire-house red lipstick, which pairs perfectly with her scarlet dress. She hears the doorbell. Her eyes light up. Slowly she strides down the stairs, primps her hair in the hallway mirror, and opens the front door. Standing there is the boy, dressed to the nines in a newly tailored suit, but his girlfriend doesn’t even notice. Why? She’s blinded by the shimmering bouquet of freshly pruned anniversary flowers. She beams with happiness…

Flowers are a good start, but…..

Of course, anniversary flowers are an essential ingredient in cooking up the perfect anniversary date, but don’t let your affection stop there. A gourmet food basket or fruit basket could be the perfect appetizer for an evening of love and romance. Oh, and whatever you do, don’t forget the wine!

Turn your Anniversary into a Memory 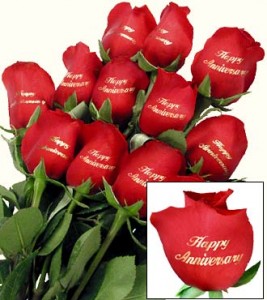 A night out on the town, anniversary flowers, gourmet food, wine; these all contribute to an enjoyable anniversary date, but if you really want her to remember this night, you have to take it one step further. People tend to underestimate the sentimental value of a teddy bear. Think back to when you were a little kid. Who kept you safe at night? Who listened to all of your wild ideas? Who stayed your best friend no matter what? For many of us, it was our trusted, soft teddy bear. Give her a teddy bear to serve as a symbol of your love for years to come. Every time she looks at it, picks it up, cuddles with it, she’ll be reminded of her wonderful man, and his thoughtful sentimentality. Brownie points for life!

It’s Easier than you Think

Guys, make note: it doesn’t take a jet-black corvette, a newly tailored suit, or a slick head of hair to make your woman smile. Sometimes, the flowers are all you need, and we’ve made it incredibly easy for you. Through our online stores, you can send anniversary flowers with just a few clicks. As if that weren’t easy enough, we offer same day too. And don’t forget our policy: free delivery for every orders placed through the website! So if you need an anniversary flower delivery, look no further. Check out our product line and begin planning your perfect anniversary date today.